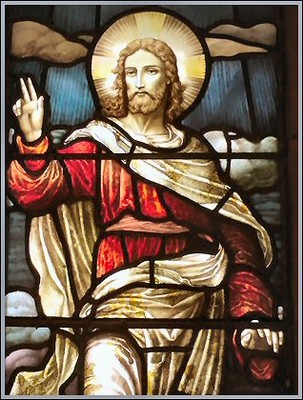 The use of glass for the purpose of glazing had been widely used for centuries in the high-status buildings of the Roman and Muslim world, but many of these achievements and advancements where lost following the fall of the Empire. Records from the 6th to the 8th Century show however, that the Christian Church throughout Europe played a huge part in preserving many of these achievements for both cultural and artistic reasons, and continued to support their use. At this time the craft of glazing in Anglo Saxon England was believed to be wholly extinct. Again the Christian Church played a major role in the reversal of this and is believed to be solely responsible for reviving this lost craft.

In 675, Abbot Benedict Biscop, following widespread travels, imported craftsmen from the continent to glaze his newly founded church at Monkwearmouth from where early samples of leaded coloured glass have been excavated.

So the relationship between the church and the ancient craft of stained glass continues.

Lightworks are extremely proud to be able to contribute towards this wealth of heritage and history contained within our churches. Our work in this field is broadly covered by three main specialist areas; the restoration & conservation of existing church glass, the design production and installation of new church windows, and external protection of both new and existing glass. We have extensive experience in all three areas and in support of this have worked closely with many Parish Church Councils and Diocesan Advisory Councils.